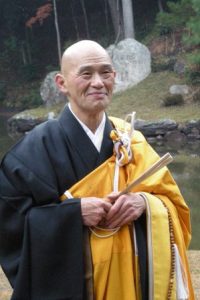 Harada Seicho was born on August 26, 1940 in Nara, Japan, to a temple priest and his wife. He was their third child and second son; three younger children, all girls, completed their warm and loving family. He had a normal childhood, playing with his younger sisters and leading them into the usual mischief children get into, including devising creative ways to get unto the theaters for free to view his passion – adventure films. The temple was poor and times were hard; there was no extra money for such things.

Although his father was an Osho-san and he was raised in a Buddhist temple, young Seicho was not interested in becoming a Buddhist priest. As a child he was fascinated by rockets and wanted to become a pilot. By his teenage years he was thinking of becoming a psychologist, having by then developed a keen interest in the nature of the human mind.

This plan was to change abruptly one day when his father asked him to deliver something to Myoshin-ji, the headquarters temple of his family temple. In his own words:

It was early, so the buses were very crowded. I had to push through his packed crowd of people to board the bus. Then move all the way to the back. As I did so, all of a sudden I came up someone who struck me as most unusual. He had a mysterious presence - there was something luminous about him. There he was, an old priest in robes, wearing glasses and reading a book, yet he glowed with a type of light. In comparison, the people around him seemed so weighed down by their thoughts and cares. I stood in the aisle, a youth who didn´t like Buddhism and lived in a temple only because of the circumstances of his birth, and yet I was deeply moved by this intelligent- looking man who seemed so deep and so still and who radiated such brightness of spirit. Why did he seem so different from everyone else on the bus? I had never met a person like this before, and I couldn´t figure out what was so inspiring about him. There I was, having been brought up in a way I didn´t want to continue, thinking that temples and priests were really not appealing, when all of a sudden this mysterious person appears with all his great depth, who was obviously a priest. Why would he choose this way of expressing himself? I was so intrigued by this man and the question he was presenting to me by his whole presence, that when the priest got off I followed him. It turned out that this person, Yamada Mumon, was on his way to Reiun-in, a small Buddhist temple in Myoshinji. I followed him right to the gate and saw him go in.

It was this encounter that made me realize how limited my understanding of Buddhism was. I saw there was a whole aspect of the religion that I knew nothing about. Despite growing up in the temple world I had turned my back on its teachings; I doubt I would ever have become a monk if I had not met Mumon Roshi. Because of him I saw for the first time how the inner quality of a person can shine forth from his entire being, and I wished to know more about the teachings that so illuminated Mumon Roshi.

While he was attending Hanazono University his father died, and his older brother took over the family temple in Nara. Upon graduating from university, he headed on foot, over the mountains and through the forests to Shofukuji in Kobe, and became a monk under Mumon Roshi. He was given the name ShoDo (True Way).

He trained hard at Shofukuji, doing many intensive week-long retreats (sesshins). However, after one particular sesshin he felt completely dissatisfied with his mind state; though he had been trying very hard, he still hadn´t realized kensho. After two further years of intense training and still no kensho, he sought out Mumon Roshi to ask his permission to leave the monastery. He wanted to go into the mountains to practice alone until he attained awakening, he said. Mumon Roshi said nothing but looked at him for a few moments, then asked, “What will happen if you don´t realize kensho?” “I won´t come back until I do!” was the determined reply. He was given permission to go.

Camping in the mountains between Hiroshima and Shimane Prefectures, he sat zazen long and hard, determined to somehow breakthrough. How much time passed, he did not know. Then one Sunday afternoon some hikers encountered him and stopped to ask questions: “Are you a Buddhist monk?” Answered in the affirmative, they commented, “How fortunate you are to be able to practice all day, all week like this! We have to work in the world, so we only have this one day in which to come up onto the mountain and chant the Buddha´s name.” Suddenly,

it was like all of my burdens had dropped off, as if someone had hit me on the back and everything was awakened within. I realized right then the mistake I´d been making and immediately went back to the monastery. That day on the mountain I realized that there was no self to be bothered! I had been crushing myself and making myself miserable worrying about the problem of realizing enlightenment, when in fact it was found in the living of every single day! Everything would come to me even if I did nothing and ceased worrying about my own little problems. Not to isolate myself up on a mountain, closed off from everyone, turning them all away and worrying about my own small state of mind, but to go and be what every day brought to me-that was my practice and the expression of my enlightenment! Ever since I realized that, my whole life has been completely different. I know there is no problem for myself, because there is no one there to feel that there is a problem. When I came back from the mountain I knew that what I had to do with my life was to live it totally with the purpose of bringing this crystal clear awareness to other people. And that´s all I really wanted to do-that was, in fact, what I´d been doing from the beginning, but I had stifled it in a small, egoistic way. I´d gone to the mountain for only my own enlightenment; it had been an expression of my ego. But because of that I´d been able to awaken to that greater purpose, awaken to that greater Self that had work to do in this world.

Afterwards my zazen was very different. Before when I sat I would do so with a heavy sense of myself. Now I didn´t have that at all, but felt in my sitting as though I was being lived through by another great energy. For the first time my eyes wouldn´t move during zazen, but would be drawn into the floor where I was looking. During kinhin -walking mediation- my eyes would be drawn into the place I was looking, and I wouldn´t feel like looking around. This went on for several days, bringing me to a place where I could answer koans much faster. The things that had been obstructing me weren´t there anymore. I saw how easily I could understand what my teacher was saying. The koans and the words I received when I passed the koans seemed obvious to me, and I could grasp their meaning very quickly. I sat lightly and energetically, and didn´t feel heavy anymore. What had happened to me on the mountain had turned my life around.

Shodo Harada practiced at Shofukuji for twenty years. One day the elderly abbot of Sogenji called on Mumon Roshi and requested a successor for the temple. Mumon Roshi chose Shodo Harada, and in 1983, having received inka -formal transmission, Harada came to Sogenji to teach, welcoming people from all over the world. Some years later he journeyed to the United States to teach, leading his first sesshin there in 1989 for the group that eventually established Tahoma Sogenji Zen Monastery on Whidbey Island, Washington. A few years later he began traveling and offering sesshins in Europe. Eventually a central place was established by ShoE; Hokuozan Sogenji Monastery in Asendorf, Germany. Each year he goes to central India as well, to lead sesshin at the Indozan Monastery established by his Indian student Bodhidharma. Groups of his students have sprung up all over the world since then. Truly living the title Zen Master, he does all of this in addition to keeping an extremely full schedule of teaching and sesshin in Sogenji Monastery in Okayama, Japan. He is utterly dedicated to keeping the Buddha Dharma alive at its most profound level.

Shodo Harada (Roshi), „ How to do Zazen”.Translated (From Japanese and biography) by Priscilla Storandt and Thomas Yuho Kirchner, The Institute for Zen Studies, Kyoto, Japan 2010.